After Père Lachaise, the other most popular location on the Morrison Paris pilgrimage is without doubt the apartment where he lived in Le Marais. Number 17 Rue Beautrellis, a building with a grand facade that is nestled down a quiet sidestreet, plays a significant role in the drama that unfolded in the Summer of '71. For it was here, in his apartment on the third floor, where Jim is said to have died in the tub in the bathroom. Other versions of the event claim he died elsewhere and was simply returned and dumped there to conceal the true circumstances of his death. Whatever the truth, this is the location where Jim spent his last days in the company of girlfriend Pamela Courson. It was here on Rue Beautrellis, and in the surrounding bars and cafes, that Jim planned to reinvent himself as a poet, plans that sadly never came to pass.

Of course, the building has changed a little over the years, most notably with the addition of steel shutters to the ground floor that detract somewhat from its classical appearance. Jim's original biography, No One Here Gets Out Alive by Jerry Hopkins and Danny Sugarman featured no actual photos of the apartment building. The key element for knowing how the building looked during Jim's actual time there is the presence of the gold 'Huissier De Justice' sign above the entrance. 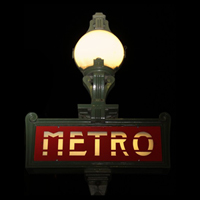 If arriving via the BASTILLE METRO STATION, take the RUE SAN ANTOINE exit, and follow the street west.

After about 300 yards, you will come to a junction with a magazine kiosk and a branch of the Crédit du Nord bank on the corner. The street to your LEFT is RUE BEAUTRELLIS.

Turn on to RUE BEAUTRELLIS and continue until it is intersected by RUE NEUVE SAINT-PIERRE. You will see a building directly ahead on the RIGHT with an ornate facade. This is 17-19 RUE BEAUTRELLIS - The place where Jim Morrison lived, and died.

For those choosing to arrive via the SAINT-PAUL METRO STATION, exit on to RUE SAN ANTOINE and proceed along the pedestrian walkway east.

After about 400 yards, you will come to a junction with a magazine kiosk and a branch of the Crédit du Nord bank on the corner. The street to your RIGHT is RUE BEAUTRELLIS.

Make your way down RUE BEAUTRELLIS until it is joined by RUE NEUVE SAINT-PIERRE. Straight in front of you on your RIGHT you will see a building with an elegant facade. You have arrived at the former Parisian residence of Jim Morrison - Number 17-19 RUE BEAUTRELLIS.